Norman Knight was born on July 24, 1924 in St. Louis, Missouri.  He worked his way up in the radio industry to become president of RKO General at the age of 29!  In 1959 he established the Knight Quality Station group which grew to own about 20 radio stations in New England. Mr. Knight was one of the leaders and pioneers in radio, broadcasting and cable TV.

Mr. Knight created and developed the first complete documentary and public affairs unit in the television field and also in radio. He was a leader in the fight against communism and personally produced 108 documentaries that warned of the dangers of communism. He received numerous awards from many organizations for this important work.

In addition to being a prominent businessman, Norman Knight has gained a national reputation as a philanthropist. His accomplishments are countless. He has received recognition from more than 50 organizations including the Junior Chamber of Commerce, the State Department, American Cancer Society, Boy Scouts of America, Freedoms Foundation, Federation of Women’s Clubs, Professional Firefighters of America and numerous firefighting and police departments, the Boys and Girls Clubs of Boston, and American Red Cross. He has received honorary degrees from five universities and colleges. His philanthropy has also extended to the Boys and Girls Camps Inc., Kiddie Kamp, Conference of Catholics, Protestants and Jews, Crippled Children’s Nonsectarian Fund, Salvation Army, YMCA, American Lung Association, American Cancer Society, Children’s Cancer Research Foundation, and numerous other organizations.  He is donated a camp to the Boy Scouts of America.  His philanthropy has helped many medical fields, including cancer, kidney disease, and pulmonary disease.  He was one of the first to begin anti-smoking programs.  He has been a leader in promoting hyperbaric medicine, and has permanently endowed the Norman Knight Hyperbaric Medicine Center at Massachusetts Eye and Ear Infirmary in Boston. He has endowed two funds at the Massachusetts General Hospital. Norman Knight has established the largest endowment fund of its type in New England for shelters for battered women and children in Boston.  He has inaugurated and financed initiatives with the elderly.  Norman Knight now devotes 100% of the time and income to philanthropy.

In 1959 Mr. Knight founded The Hundred Club of Massachusetts, a nonprofit philanthropic organization which benefits the families of police officers and firefighters who have been killed in the line of duty.  Of 110 similar organizations in the country, the club of which Knight is still President is by far the largest and most active.

Mr. Knight was a close friend of President Kennedy and was one of his philanthropic and communications advisers.  President Eisenhower asked Knight to serve on a special Advisory Committee and he met regularly with the President. 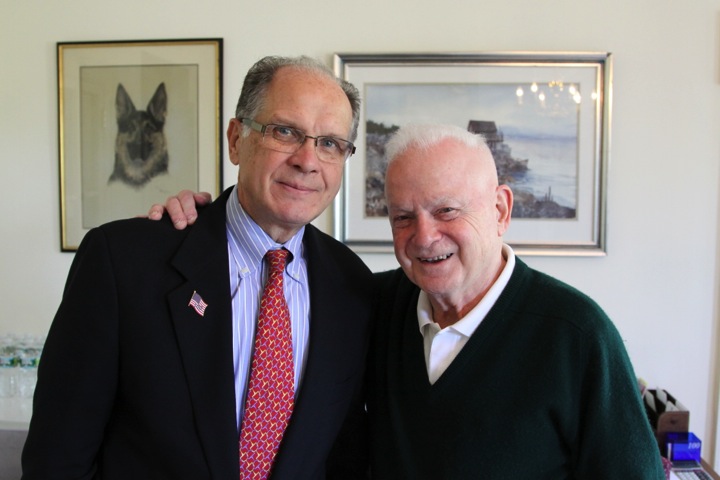 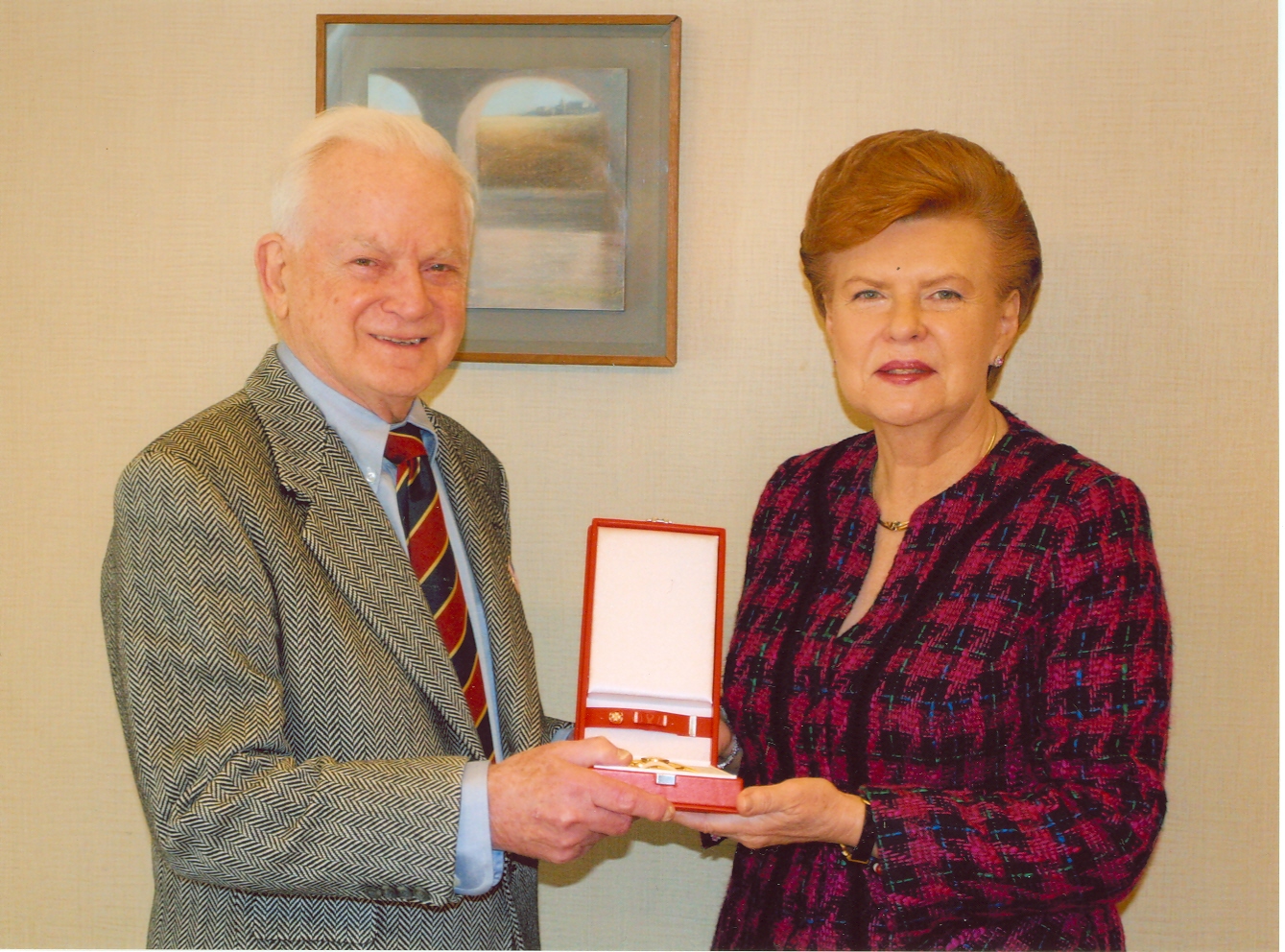 The people of Latvia are fortunate that Mr. Knight has recognized their plight that occurred as the result of Soviet occupation.  In the 1930s independent Latvia had medical care that was rated second best in Europe.  In Latvia became free 1991 its medical care was that of a Third World country.  Mr. Knight has generously donated to the Latvian Medical Foundation, which strives to help Latvia to improve its medical care.

From 1999 to 2002 Mr. Knight has donated $85,000 to the Latvian Medical Foundation. With the support of Norman Knight, the Knight family eMedicine Center was established at Stradins University Hospital in 1999.  This center has enabled the leading academic clinical hospital in Latvia to connect to the outside world via the Internet. About the Norman Knight eMedicine Center.

The purpose of the fellowship is to enable Latvian doctors to travel abroad to gain new knowledge that will enable them to upgrade medical healthcare in Latvia.  Mr. Norman Knight funded the Fellowship of the grant $25,000.

Mr. Norman Knight was awarded a Class II Prize cross in February 2006 on the merits of the State of Latvia. The award was handed out by president of Latvia Vaira Vīķe-Freiberga. 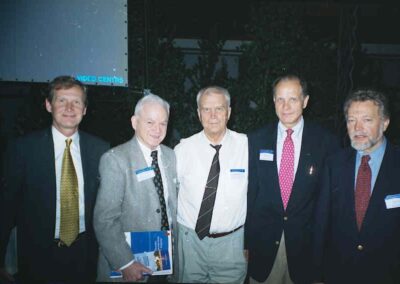 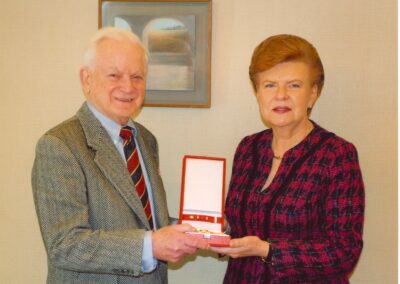 Medal of Honor from President of Latvia to Norman Knight 2007 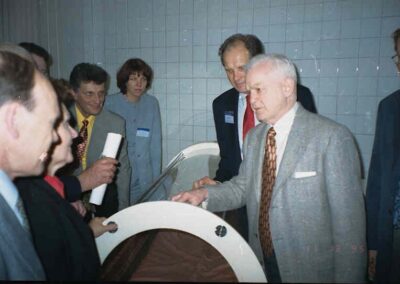 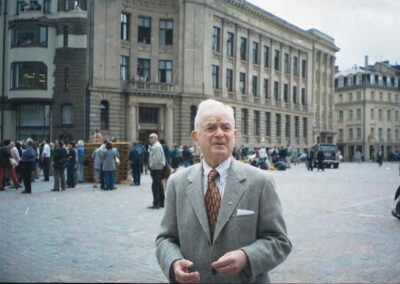 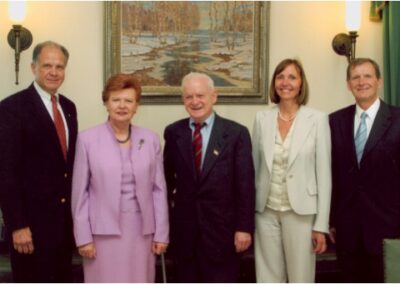 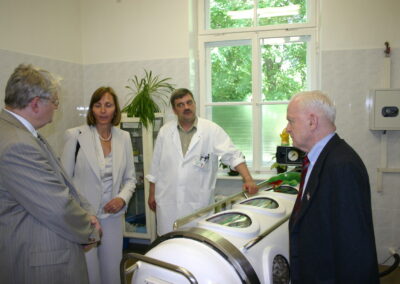 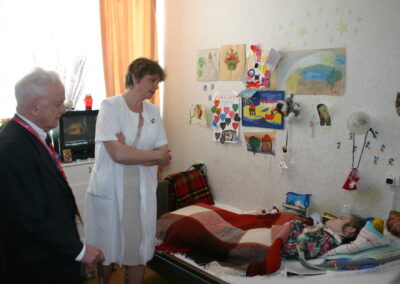 Andrónico Luksic Craig was born 16 April 1954 in Antofagasta, Chile. He is a businessman and chairman of Quiñenco, a holding of the Luksic Group, one of Chile’s largest conglomerates. Andrónico Luksic Craig is the eldest son of Andrónico Luksic and Ena Craig. He spent his early childhood years, along with his younger brother Guillermo, in the mineral deserts of northern Chile. When Andrónico was only around four years old, his mother died during a heart operation. Fourteen years after this unfortunate death, his father would marry Iris Fontbona; the couple would go on to have three children: María Paola, María Gabriela and Jean-Paul.

In 1960, Andrónico and his family moved to Santiago, where they lived in a house at Alcántara street. In Santiago, he first attended The Grange School. Then, at the age of 16, Andrónico went to the United States to attend high school at the Dublin School for Boys (in New Hampshire). Upon graduating, he moved to Boston to pursue a degree in business at Babson College. His tenure at Babson was cut short when he returned to South America to work in the family’s Ford dealerships.[citation needed]

There, he married the Argentine Patricia Lederer Tcherniak (born in 1958 ?), with whom he had five children: Andrónico (b. 1981), Davor, Dax, Maximiliano and Fernanda.[2] The couple divorced in 2016.

At the age of fifty, without prior mountaineering experience, Andrónico managed to reach the summit of Mount Everest in May 2004. Soon after, in 2005, he completed the “Seven Summits of the World” (reaching the summit of the highest peak on each of the seven continents of the world.When his brother Guillermo died in 2013, Andrónico stepped into the role of Chairman of the Luksic Group and several of its related companies, notably Quinenco S.A., the holding company for the family’s non-mining investments. He decided to concentrate on consolidation of the group and on building strong positions for the new acquisitions.

Andrónico Luksic was designated as Chairman of Quiñenco’s Board in April 2013.

He is also a member of the Boards of the mining companies Antofagasta PLC and Antofagasta Minerals, both part of the Luksic Group.

In 2010, Andrónico Luksic was reelected as one of the three representatives of the APEC Business Advisory Council (ABAC).[7]

In 2011, Andrónico was awarded with Gold Medal of the Americas Society for his involvement in the education field (promotion of education, debate and dialogue in the whole America). Luksic is the first and only Chilean businessman who has received this high distinction.

In 2013, Andrónico Luksic Craig was awarded business leader with best reputation in the “Merco Chile 2013”, a corporate reputation rating published by El Mercurio, for his role as Vice-Chairman of Banco de Chile.

He is a member of the International Advisory Board at the Blavatnik School of Government, University of Oxford. 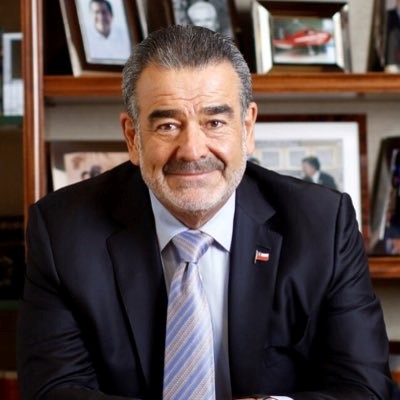